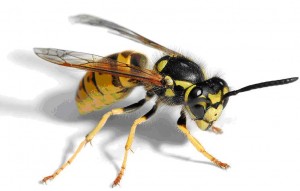 We remove European wasps in Melbourne, at your home or workplace can be a dangerous tool. Although wasps such as yellow jackets and hornets pollinate flowers in your yard, they can quickly turn into a problem. House roofs are probably the most known place for European wasps to nest and cause problems with a bee hive. When wasps and bees are seen from the under the house of your home this would normally mean that there is a wasp nest or hive. Try to keep clear from European wasp as the can be dangerous if you get close enough, so as a pest control company we kill wasps instantly as we try not to to remove wasps as it can be a difficult task.

Wasps around the home


Removing a European wasp nest in Melbourne is no easy task and you will need to have the right tools to do the job to kill wasps. If you want to do the job yourself you need to put on a set overalls to cover your skin. You will need to wear protective glasses, gloves and a fly hat, and you will need the right chemicals to kill these wasp that are in your cavity wall or a tree stump in Melbourne. This job is for a professional to handle of removal, most people that try to do it by themselves ending up getting bitten by wasps so if you want these wasp killed instanlty we are the pest control company to do the job.

How To Deal With These Wasps

You can use chemicals or dust, such as any of the wasp insecticides and has to be done by us. Or you can try to a natural wasp nest removal method yourself, remember there are precautions to be taken before undertaking the actual job of removing or killing a wasp nest in Melbourne. You will need to protect yourself from the sting which can be extremely painful and protection against attacks. You should also use gloves, goggles, and masks to keep your face and arms protected in Melbourne. For beneath ground European wasp nests, place an electric gun and blow into the wasp nest entry of path. Ensure a hard application to the wasp area as this will kill the wasps in time or get rid of the wasps in Melbourne.

Destroy the Wasps is to your family


Wasp is basically an insect that basically survives on a diet containing of the nectar of a wide range of flowers, with lots of others. Usually a solitary wasp does not cause much of a problem if you don't disturb the nest, you can use European killer for getting rid of it if needed in Melbourne. It is when you chance seeing a nest of wasps very close to were you live that a serious problem you have. Social wasps are stand their ground and can defend their nest viciously. Killing wasps and nest removal requires professional help, but applications to get rid of wasps are generally best done at night when the wasps are less in you way. The application of synthetic pyre-thrum dust called dust is effective in most cases. Once the wasp nest is dead we remove the nest and clean up the area.

Ways to Get Rid of Wasps


DIY wasp nest removal can cause a risk for you and your kids health and safety. If you have wasp nest in and around your home, please don't ignore it as wasps a very fast nest builders. Call your local pest control asap as you notice a sign of wasp nest before it becomes a hazard at your home. Rapid Pest Control Melbourne are the pros in wasp nest removal around Melbourne, no matter how big the size and the position of the wasp nest, we can get rid of it fast and easy and safely. Cut off and destroy the nest using a pesticide instantly for this use. Dusts are very effective in killing the wasps in their nest. An aerosol is just as effective. The nest can then be removed and destroyed in case any wasps have returned after the treatment.


The best way to remove wasps is to target the main problem which is the nest. Wasp nests in Melbourne can be very deadly to deal with. The wasps tend to feel exposed and can become highly adverse. Getting rid of wasps is less about removal of the nest, rather the focus is on manage it and the wasps. It involves a pest controller in full gear to insure that you are safe from any stings. The pest control expert will then use sprays, powder and chemicals on the nest after the entire colony is wiped out. In most cases, wasps have been known to build nests under the the ground, below paving, in walls or plants and in trees. It can be very difficult to treat the problem in these cases and usually activity will continue even with your best pursuit to control the problem. Our professionals European wasp removal in Melbourne have the capacity to complete the exact type of wasp that is causing you the problem in your back yard. They also have the required suit to ensure your in safe hands. Each treatment is different based on the type of wasp you have and where it is situated. Once the nest has been taken away, we can remove it from your property (unless it is behind a wall or up high).